A year after NGS closure…

Navajo and Hopi evaluate progress toward an equitable economy

Window Rock – November 18th marks one year since the Navajo Generating Station burned the last of its coal. Navajo and Hopi community leaders are releasing a report card grading on a variety of key areas related to transition efforts they have been tracking over the last year. At the time of NGS closing, local Native grassroots groups launched the #NavajoEquitableEconomy Initiative to present a vision for building an economy rooted in traditional tribal values that prioritizes the protection of Navajo waters and the natural world. At the launch of that initiative, the groups vowed to serve a watchdog role and track progress on an economic transition and clean-up efforts.

The report card assigns letter grades to five main areas, looking at how utility and government officials are doing in making progress on the transition away from coal:

Details on the report card can be found at: www.NavajoEquitableEconomy.org 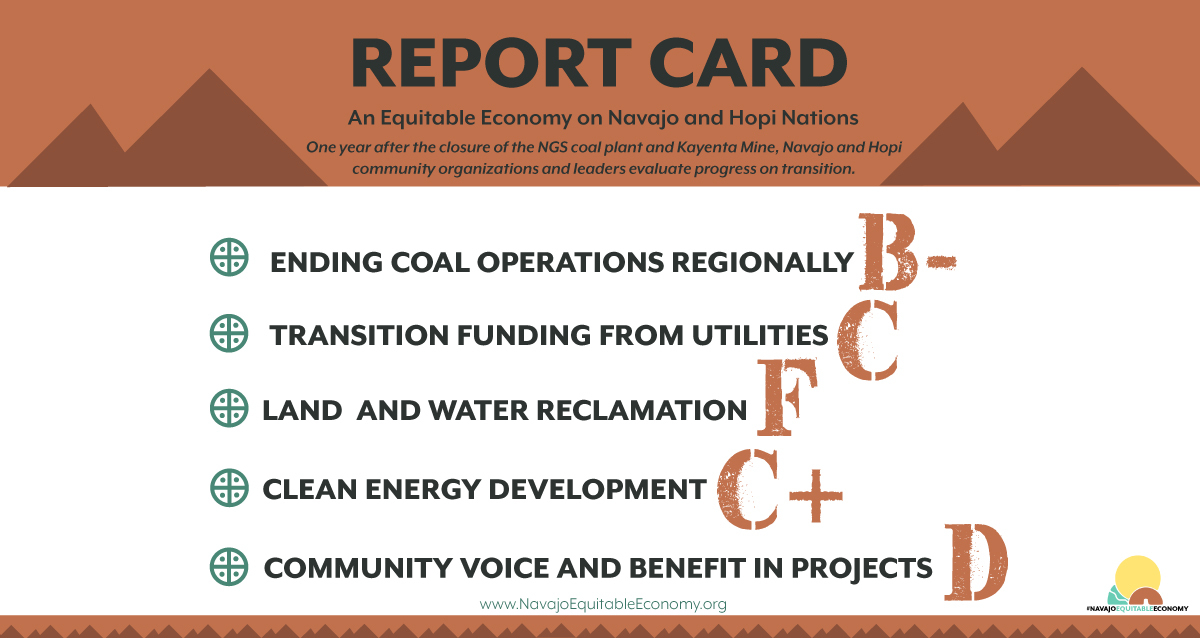 APS recently proposed $144 million to support affected tribes and surrounding communitiesin their transition away from coal. Other utilities, however, have yet to step up to offer transition funding. After decades of profiting off of the use of Navajo and Hopi resources, NGS owners all have a responsibility to support these tribes. On the other end of the spectrum, community leaders are increasingly frustrated with Peabody Energy, which has yet to fulfill its own responsibilities — costing the Navajo and Hopi hundreds of much needed jobsthat could be deployed in the cleanup and reclamation of Kayenta Mine. Two former Hopi Chairmen, along with Congressman Grijalva, have recently voiced a deepening sense of alarm at Peabody’s failure to fully meet its obligations.

“Our communities deserve to know where we are with progress or lack thereof on any work to support our local economy and the cleanup of our land, air, and water,” said Ben Nuvamsa, former Hopi Chairman. “In some critical areas of the transition, we are getting dismissive or no real updates from Peabody, federal agencies like OSMRE, or tribal authorities.”

“Over the past year, we have engaged government officials, utility companies, and other stakeholders. We have seen movement in some areas, and in others we have seen inaction, that is costing Navajos and Hopis greatly,” said Nicole Horseherder, of Tó Nizhóní Ání. “Peabody, for example, has failed to lay out a plan to clean up the Kayenta Mine. We have already seen how reclamation of the Black Mesa Mine has been painfully slow and insufficient. We can’t allow this to keep happening.”

“The closing of NGS was only the beginning. Organizations like ours remain vigilant on the work that’s still left to be done to ensure that the communities that were for decades affected by the extraction and pollution of our resources are taken care of,” said Carol Davis, of Diné C.A.R.E. “Lack of access to water, which was already a huge issue for many years, has become even more painful during this time of covid-19. Our land was once dotted with springs and wells before the use of coal. There is much work to do still to restore the health of our communities.”